The city of Q’umarkaj was the capital of the Quiché Kingdom. It belongs to the Postclassic Period (1250-1523 AD). Settling on a 120,000 square meter plateau, surrounded by ravines with a depth of more than 100 meters, the site is surrounded by the Sierra Madre and the Sierra de los Cuchumatanes, combined with wide valleys of the central basin of El Quiché. At its peak, it had a population of 15 thousand inhabitants. His society was divided into royals, vassals or commoners and slaves.

The caves were an entrance to the underworld, in the case of Q´umarkaj it was a system of artificial caves where the priests carried out rituals with the aim of communicating with the deities and ancestors. (Jocholá cited by Cruz, 2019)
They are located on the west side of the city so you can ensure that they cross a large part of it, considered as sacred according to many sources since it was a form of direct communication between the land and the underworld. (Carmak cited by Cruz, 2019)
In Q’umarkaj there are no natural caves, so the Quiche built them artificially.

The curated information of the ancient Mayan city Zaculeu was carried out by a team of experts in charge of content research Marcelo Cruz, and content editing and validation by archaeologist Yolanda López. Likewise, there is a communication  team Manuela Figuera in charge of transferring the investigated data into audio guides in Spanish and English.

Tulán offers you the exploration experience using the geolocation of elements in each of the 10 pieces of the city of Q'umarkaj in the application, and this can also be done offline.

- The Q’umarkaj Museum, in which you can see different pieces including ceramic pieces, monuments. 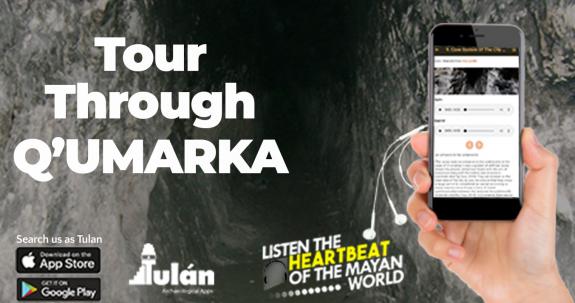