The Zaculeu archaeological site (White Land in the K'iche’s language) is located in what is now known as the department of Huehuetenango, formerly called Xinabajul. It is located just under 1 km from the head, so it can be reached on foot or by car. It was one of the most important cities of the realm Mam of the Postclassic Maya period and was populated from the year 1250 to 1524 bC. In this city were found a large number of burials, ceramic vessels and carved pyrite were found, so, in 1931, the city was declared National Monument and in 1970 a National Pre-Columbian Monument.

The curated information of the ancient Mayan city Zaculeu was carried out by a team of experts in charge of content research Alejandra Cordero, Alejandra Xiloj and content editing and validation by archaeologist Rosaura Vásquez. Likewise, there is a communication  team Fernanda Morales in charge of transferring the investigated data into audio guides in Spanish and English.

Tulán offers you the exploration experience using the geolocation of elements in each of the 10 pieces of the city of Iximche in the application, and this can also be done offline.

- The woman of the um

- A sculpture without identify

- A mayan ornament for the ears

- The tomb of Bulding 1 and the individual C 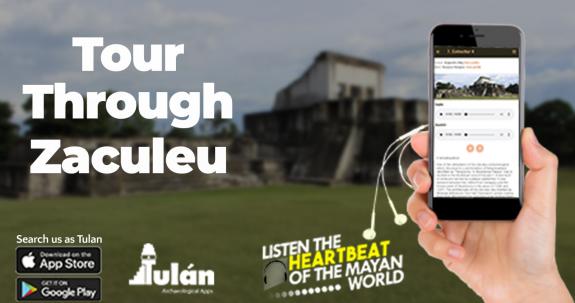