Mixco Viejo, also known as Jilotepeque Viejo, is the name related to the remains of the ancient Mixco Viejo city (Chuwa Nima Ab'Aj), which today is an archaeological park located in the township of San Martín Jilotepeque, east from Chimaltenango about 60 km from the capital city. Nowadays, its ruins are object of study for their historical transcendence.
The site of Chuwa Nima Ab'Aj' (Mixco Viejo), corresponding to the post-classic period of Mesoamerica, presents the traditional construction to the period, of defensive nature and a planned distribution of the terrain. Several authors think that the site was occupied by the Pokoman group, however, recent studies determined that when it was the conquest, a branch different from the Kakchiquel group inhabited the place.

The curated information of the ancient Mayan city Chuwa Nima'ab' aj (Mixco Viejo) was carried out by a team of experts in charge of content research Aida Sierra, Tania Cantoral and content editing and validation by archaeologist  Rony López. Likewise, there is a communication  team Nicolle De La Vega in charge of transferring the investigated data into audio guides in Spanish and English.

Tulán offers you the exploration experience using the geolocation of elements in each of the 17 pieces of the city of Chuwa Nima'ab' aj (Mixco Viejo) in the application, and this can also be done offline. 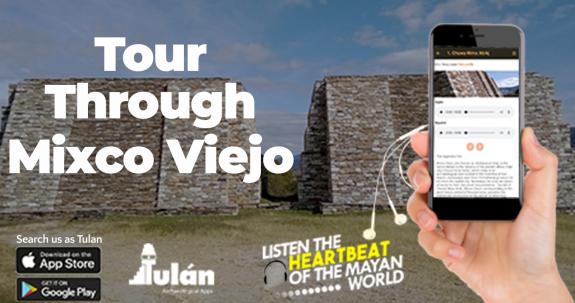