This article is a reproduction of the version measured by Manuela Figueroa of the article that presents the Temple Tohil in the Tulán application, which was made by Marcelo Cruz and edited by Yolanda López.

This is the main temple of the city of Q´umarkaj, it is dedicated to the deity of the god Tohil in the cosmogony of the Quichés, being the most important deity, so it is located in the central square. It was built between 1,400 or 1,500 years, in the postclassic period. It had 15 meters high and four terraces. (cocholá cited by Cruz, 2019)

On the outskirts of the temple the ceremonial altar was located, in which the most important rites and sacrifices were performed for the god Tohil, place where the people in general congregated.

The structure has three access steps, each one oriented to the cardinal points except the West. (Carmak cited by Cruz, 2019)

According to studies, the temple is built with a mixture of the following materials: lime, sand, mud and stone. We can deduce, the importance of this temple given its height and its location in the city of Q´umarkaj. (Jocholá cited by Cruz, 2019).

Currently this temple is not fully exposed. 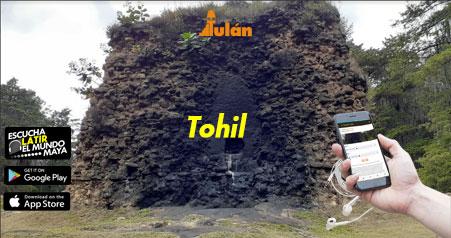